While searching the various options for deep-sea fishing charters in the North Myrtle Beach area, I came across Voyager Deep-sea Fishingand Dolphin Cruises located in North Myrtle Beach. The website is very well designed and it offers good information about what to expect on your trip. Unfortunately, this is where the good ends. If you read to the end, you will see that this trip gets progressively worse.

Voyager is located at Dock Holiday’s Marina, which is further inland than some of the other fishing charters. I knew this when I booked the trip but I figured the cruise out to sea would be a nice addition for my son. Turns out that I was right, the trip out to sea was nice, but it does cut into your fishing time. Round trip, you will probably lose a total of an hour.

The Captain of the Voyager was friendly and his methods were different from what I had previously experienced. I am far from a boating or deep-sea fishing expert but it seemed like he spent too much time in one fishing spot. Our first stop produced very few fish; the fish we did catch were too small to keep. We played catch and release for what seemed like an eternity before moving to the second and final stop.

Here we came across a school of small black sea bass; most were around ten inches and had to be released. I happened to reel in the only keeper that was just over the thirteen-inch mark. It was at this stop that I also caught a 14” Chocolate Chip Porgy. The Porgy ended up winning the fish pool for the biggest fish. I hate to boast, but this is the second year in a row that we have won the fish pool. Last year my wife won with an Atlantic Sharpnose shark! The deckhands made their way around the boat with a bucket to collect tips while we headed back to the marina. When we returned, we were given our fish. Sadly, the majority of the passengers had no fish to show for their day at sea.

This is where the first mate let his true colors come out. This is also where I determined that I would choose a different deep-sea fishing charter on our next visit to North Myrtle Beach. When entering the fish pool, my family of three were the last names added to the list. I also paid for my son just in case he landed a whale. I later spoke with one of the deck-hands and he let me know that there were approximately 30 names on the list. Thirty passengers who pay $5 each would create a jackpot of around $150. But at the conclusion of our trip, the first mate handed me $65 and walked away. When I asked about the difference, he told me that the crew keeps a third to split between them, I still should have gotten $100.

I was going to leave it alone at this point. I just wanted it known that, unlike the first mate, I can do simple math. However, on the heels of lying to me about the fish pool, he offers to clean the few fish we caught for $15. The website that I mentioned earlier clearly says that they clean fish for their guest at a rate of .50 per pound. Pardon the expression, but there is no way in hell I had 30 lbs. of fish.

When I told him that I would take my fish elsewhere to be cleaned, he got defensive. He began to rant about how little the deckhands are paid and then he pulled some small bills out of his pockets and tossed them in my cooler. All of this went on in front of my son. I am thankful that my wife decided to head to the car. I refused to take any of his money. I simply said, “You don’t owe me anything, I just want my fish.”

On the way out, I briefly spoke to the owner. I posed the question of how much the crew takes of the fish pool. The owner, who was a nice guy, said that they usually take a twenty-percent cut to split between the crew on top of the tip to which most of the passengers contributed. When I told him the cliff-notes version of what had just taken place, he shook his head in frustration and offered to get the rest of my money. Instead of waiting for the line of passengers to board, I refused the money. I told him that it was not about the money, but I do not like to be lied to, stolen from, or to be treated with complete disrespect.

On our next trip to North Myrtle Beach, I plan to book our deep-sea fishing excursion with Little River Fishing Fleet. On our previous trip with them, we caught more fish and had more fun. Read the full review by clicking the link above.

After we worked our way through the Gran Maze at the Coconut Creek Family Fun Park, we made our way over to the first miniature golf course. This has to be one of the top-rated miniature golf courses in Panama City Beach Florida. The course is very well maintained, vibrantly lit, and it is nicely decorated with a wildlife theme throughout. As you explore this unique putt-putt course you will be surrounded by a wide variety of interesting jungle scenery. You will see large sculptures of elephants, giraffes, alligators, and zebras to name a few. If that is not enough, there is a huge waterfall, a pond, and a couple of rope bridges. When you visit Coconut Creek be sure to have your cell phone or camera fully charged. There are plenty of photo opportunities for the family and one-of-a-kind backgrounds for Facebook selfies.

Many of the holes on the course are really short. It seemed that the shorter holes were designed to be slightly more difficult and featured various inclines which I always struggle with. That said, this course is not what I would consider hard and should be manageable for most kids. My son, who was 7 at the time, did not have any problems playing the course and I feel that he had a lot of fun.

The staff seemed to be very nice and helpful as well, we are the family that can never seem to find the first hole. As far as the prices at Coconut Creek, thy seem to be in line with most other touristy miniature golf courses. If you plan to enjoy the Gran Maze as well as one or both putt-putt courses, be sure to ask about the unlimited play pass. When we visited, the unlimited-play pass was just $24 per person, and I believe kids five and under played free. This is a great deal for a night of family fun and the pass also allowed for free play the following day before 5pm.

Overall, this was a very family oriented Panama City Beach mini-golf course. The course provided some challenges for the adults and still remained fun for the kids. Between courses, you may even want to try weaving your way through the Gran Maze at Coconut Creek.
at July 07, 2021 2 comments:
Email ThisBlogThis!Share to TwitterShare to FacebookShare to Pinterest
Labels: Golf, Recreation
Location: 9807 Front Beach Rd, Panama City Beach, FL 32407, USA

The Gran Maze of Coconut Creek was the first maze adventure for our family. I originally had low expectations of the maze, walking through a maze was not my idea of a fun time. As it turns out, I was wrong, my family and I had a lot of fun. That said, the entertainment value was on par with my original expectations. I know that it may sound like an oxymoron to say that something is fun but not entertaining, but this is the case with the Gran Maze. I think this could be improved by adding some themed décor throughout the maze. If nothing else, it would be an opportunity to stop for a selfie or a family photo.

The object of the maze is to find your way to four points located in the center. All four points are connected to form one football-field-sized maze. Once at each point, you punch your card to show that you have completed the maze. My family of three, who depends deeply on Google maps for navigation, finished in around 30 minutes. The leader board that is located just outside the maze, displayed times as low as 15 minutes. Honestly, it is hard to believe that the course could be completed in 15 minutes without being extremely lucky or by cheating.

The maze at coconut creek provided a fun way to stretch our legs and to log a few steps in our Fitbit’s. Our first maze was a learning experience. I am sure we will seek out this type of adventure more often going forward. With a little practice, we may even shave a few minutes off our time. 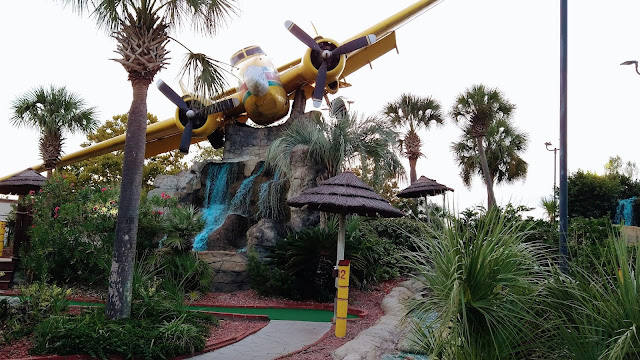