Bizarre Sea Creature, The Oyster Toadfish! Should We Have Eaten This?

This Bizarre find is not some road-side attraction, or a novelty item found in a gift shop. No, this fascinating creature is the work of nature. We were deep-sea fishing when my wife pulled in an Oyster Toadfish. The slimy creature measured 12-14 inches and was ugly as the day is long. Our guide said that no one eats these fish and advised us to throw him back. I have since read online that they are safe to eat and that they are surprisingly tasty. But trust me, I am not disappointed that I did not have Toadfish for lunch, he did not look the least bit appetizing 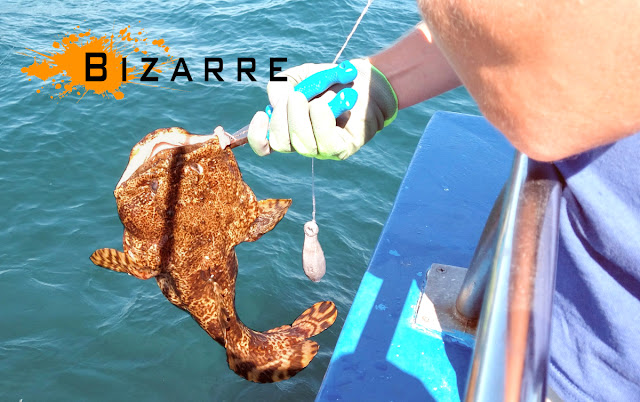 The mouth of this fish was disproportionately large when compared to his body. As the name suggests, they are known to eat oysters. The large mouth allows them to capture a whole oyster shell in their mouth. The power of these massive jaws allows the fish to crack the shell open to access the meat inside. While this sea critter is bizarre, he is also quite magnificent. 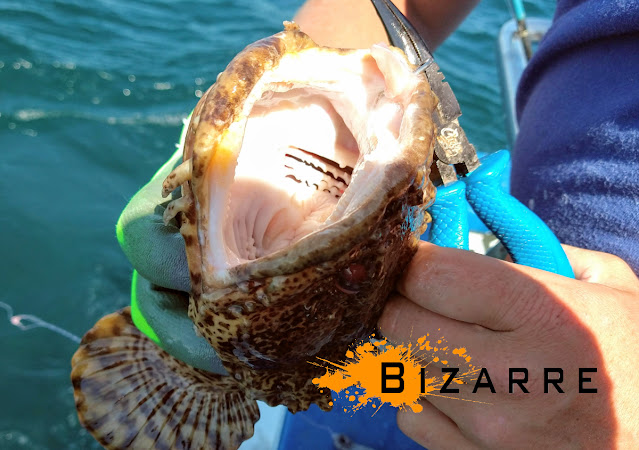 at May 02, 2022 No comments:
Email ThisBlogThis!Share to TwitterShare to FacebookShare to Pinterest
Labels: Bizarre, Deep-sea Fishing

While searching the various options for deep-sea fishing charters in the North Myrtle Beach area, I came across Voyager Deep-sea Fishingand Dolphin Cruises located in North Myrtle Beach. The website is very well designed and it offers good information about what to expect on your trip. Unfortunately, this is where the good ends. If you read to the end, you will see that this trip gets progressively worse.

Voyager is located at Dock Holiday’s Marina, which is further inland than some of the other fishing charters. I knew this when I booked the trip but I figured the cruise out to sea would be a nice addition for my son. Turns out that I was right, the trip out to sea was nice, but it does cut into your fishing time. Round trip, you will lose approximately one hour of fishing time.

The Captain of the Voyager was friendly, but his methods were different from what I had previously experienced. I am far from a boating or deep-sea fishing expert, but it seemed like he spent too much time in one fishing spot. Our first stop produced very few fish; the fish we did catch were too small to keep. We played catch and release for what seemed like an eternity before moving to the second and final stop.

Here we came across a school of small black sea bass; most were around ten inches and had to be released. I happened to reel in the only keeper that was just over the thirteen-inch mark. It was at this stop that I also caught a 14” Chocolate Chip Porgy. The Porgy ended up winning the fish pool for the biggest fish. I hate to boast, but this is the second year in a row that we have won the fish pool. Last year my wife won with an Atlantic Sharpnose shark! The deckhands made their way around the boat with a bucket to collect tips while we headed back to the marina. When we returned, we were given our fish. Sadly, the majority of the passengers had no fish to show for their day at sea.

This is where the first mate let his true colors come out. This is also where I determined that I would choose a different deep-sea fishing charter on our next visit to North Myrtle Beach. When entering the fish pool, my family of three were the last names added to the list. I also paid for my son just in case he landed a whale. I later spoke with one of the deck-hands and he let me know that there were approximately 30 names on the list. Thirty passengers who pay $5 each would create a jackpot of around $150. But at the conclusion of our trip, the first mate handed me $65 and walked away. When I asked about the difference, he told me that the crew keeps a third to split between them, I still should have gotten $100.

I was going to leave it alone at this point. I just wanted it to be known that, unlike the first mate, I can do simple math. However, on the heels of lying to me about the fish pool, he offers to clean the few fish we caught for $15. The website that I mentioned earlier clearly says that they clean fish for their guest at a rate of .50 per pound. Pardon the expression, but there is no way in hell I had 30 lbs. of fish.

When I told him that I would take my fish elsewhere to be cleaned, he got defensive. He began to rant about how little the deckhands are paid and then he pulled some small bills out of his pockets and tossed them in my cooler. All of this went on in front of my son. I am thankful that my wife decided to head to the car. I refused to take any of his money. I simply said, “You don’t owe me anything, I just want my fish.”

On the way out, I briefly spoke to the owner. I posed the question of how much the crew takes of the fish pool. The owner, who was a nice guy, said that they usually take a twenty-percent cut to split between the crew, this was on top of the tips that were collected. When I told him the cliff-notes version of what had just taken place, he shook his head in frustration and offered to get the rest of my money. Instead of waiting for the line of passengers to board, I refused the money. I told him that it was not about the money, but I do not like to be lied to, stolen from, or to be treated with complete disrespect.

On our next trip to North Myrtle Beach, I plan to book our deep-sea fishing excursion with Little River Fishing Fleet. On our previous trip with them, we caught more fish and had more fun. Read the full review by clicking the link above.

We showed up at Calabash Marina on the morning of our deep-sea fishing Excursion. They asked that we arrive 30 minutes early so breakfast came from a drive-thru window. The check-in process was flawless, since I had our reservations printed, it only took a few minutes to get us checked in. 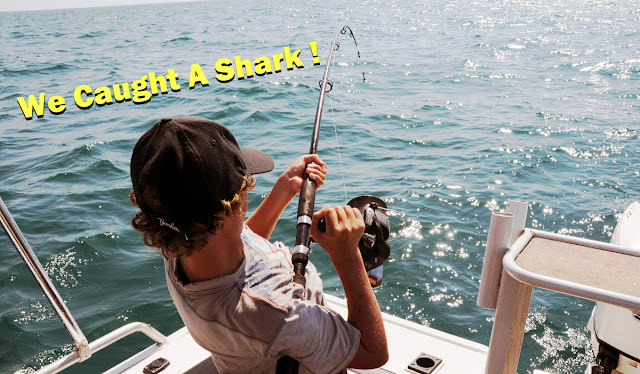 Once checked in, we boarded the Hurricane II where we were greeted by one of the crew members. He recognized that we had a young fisherman with us, so he offered us a spot in his section of the boat. He assured us that he would help my son out as needed, which was nice because I was trying to figure things out for myself. Since this was our first deep-sea fishing excursion, we opted for the half-day trip. The captain did a wonderful job, he kept us on fish all morning and we moved to a new location each time it slowed down.
All of the deckhands were knowledgeable, professional, and friendly. In addition to being able to identify many of the different fish species, they were also quick to assist with removing fish, adding bait, and fixing tangles. Since you will be spending the better part of your day at sea, the onboard crew members play a huge part in the overall experience. I cannot say enough about these guys, they really made this a memorable experience. 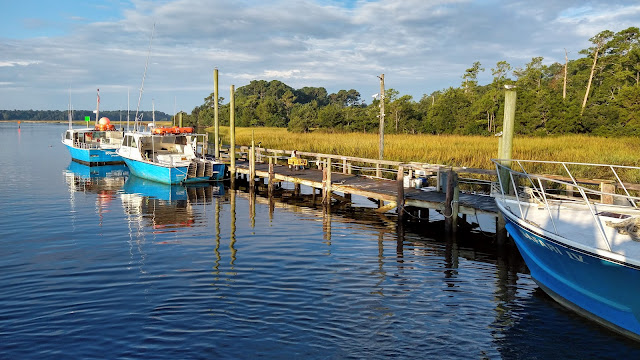 My wife ended up catching the largest fish of the morning and won the fish pool for biggest fish. She managed to reel in a Sharp Nose shark that was just under 4ft in length. When we returned to the dock one of the deckhands cleaned our keepers. They do not charge for this service, but keep in mind that they do accept tips. We gave several of our fish away to other passengers who were not as lucky. When all was said and done, we were able to take a few pounds of shark and grunt fish over to Crabcatchers restaurant where they will cook your catch. Neither my wife nor I had ever had the opportunity to try shark. The shark was delicious, but we enjoyed the flakey, white meat of the Grunt even more. 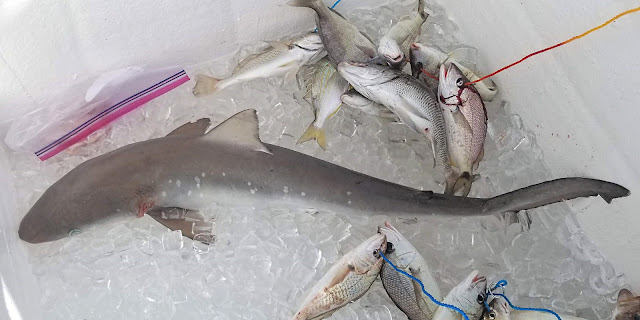 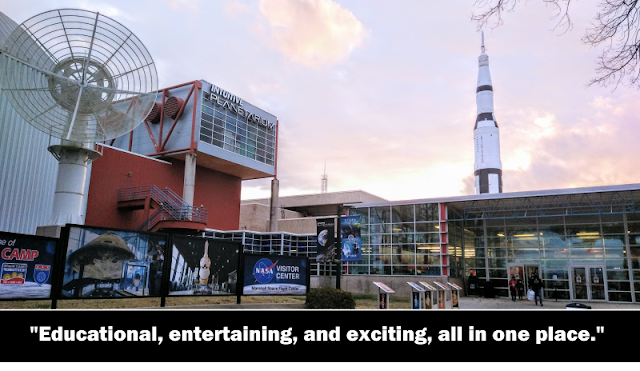